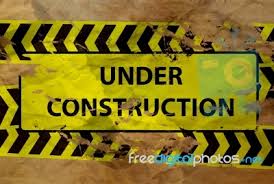 Can you say addicted? Believe you me I'm more surprised that I pulled myself away from this highly addictive game to write this post. If you haven't started playing yet & you like bejeweled your are missing out!!!! I'm so addicted!!! I just wanna say that I feel like the little girl off of Despicable Me - "It's so addictive!" 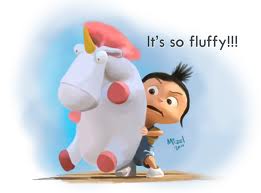 Now the cat.
I want to say that I've never had a female cat, let alone been around a female cat in heat. This cat is driving me INSANE! Spice's constant chatter that sounds like a dove and her constant 'butt in air' stance! UGH! Now her newest thing is rubbing her body all over Mr P's shoes as soon as he gets home - as if she can't get enough of his smell.  She follows me around all day doing this half meow half purr, when you look at her she flops on the floor - butt in the air. And if you think this is only during daylight hours.. oh I hate to disappoint! There is NOTHING like being woken up by your cat crying out to the 'male kitties' from your bedroom window. Furthermore, I thought cats slept through the day - this cat hasn't left my side (day or night) in over two months!
Men should be so glad that women aren't like this when we ovulate! I wonder how Mr P would react to a 'humans' version of a cat in heat.. what that would be like moaning and laying with your legs spread open at the very sight of a male. Could you imagine??! 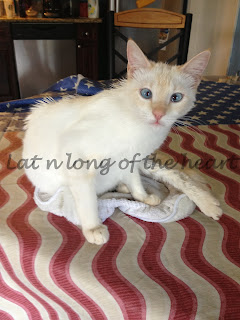 Moving forward here:
We went to do the 'baby dance' the other night and threw all the animals out of our room. Half way through Spice started her cat call. We look up to see her perched on the dresser - watching our every move. It was as if she was saying.. "oh yea right there" .. "No little to the left.. yea oh yea". It was the most unnerving thing I've ever been around. So I would say that her vet appointment tomorrow is PAST overdue.
FYI:
The vet informed me that a female cat can go into heat multiple times during her 'season'. Cats usually got into heat in the Spring and Fall. If we have someone who comes to our house who has a 'male' cat and she smells his smell.. this behavior will start all over. And so at this point - if you have a male cat and enter my home = I will shoot you. Besides I don't think Spice got the memo that Summer has officially arrived.
-
I'm deliriously excited that the 'bestie' is returning home from getting her 'bonus son'! I can't begin to describe how much I have missed her... I'm excited she gets to spend time with N and that she will be HOME tomorrow!!!!
Speaking of best buddies: my be fri will be returning to the States from Hawaii in Dec!!!! His adorable little fam will be joining us in Dec & I couldn't be more excited. I wasn't excited to hear that he will be deploying shortly after getting settled with us, but I'm so happy to have them so much closer. I can spoil those little kiddo's easier if they are under my own roof.. mwahahahaha.
Ok peps I think I have a new life waiting for me in Candy Crushers.. did I mention I was addicted??