Hello!
I hope you all had an amazing Independence Day!
The boys were off from the 3rd until the 7th - it seemed longer than just four days!!
Oh man do I have some pictures to share with you! 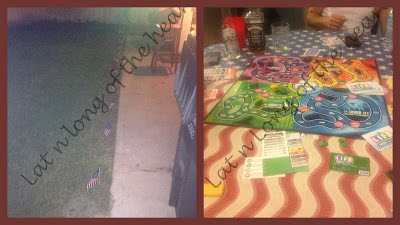 After cleaning the house and mowing the yard - I put up all my Fourth decorations. As you can see above I placed flags along our walkway - (Target $1 a package - 3 flags per package). We started our fun weekend with a friendly game of 'Life', and my brother won both games! We ended up calling it quits around 2 am.

July 4th:
Some of you may know that this is my favorite holiday ~ and this  year was extra special to me, and it was also amazing! We started our day off with a patriotic breakfast: 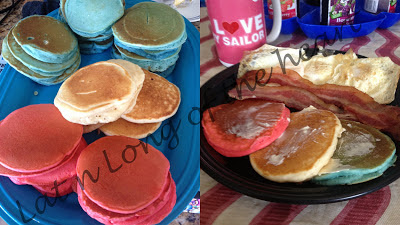 I used a bisquick recipe for the pancakes and we added food coloring.

After our yummy breakfast, I decided to cut up watermelon & prepare a cooler for that evening. We passed the time by playing 'Water pong'... meaning instead of using beer, we playing beer pong with water. It was a lot of fun and great practice!!


We went to my Sailor's base and watched the show. It was perfect and right off the water. We had the best firework show I've ever seen!!! 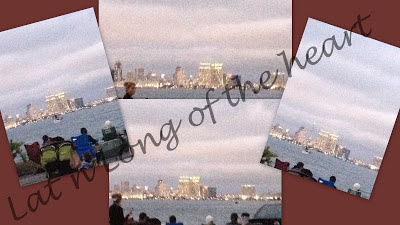 Top: Showing off the San Diego skyline before the fireworks started 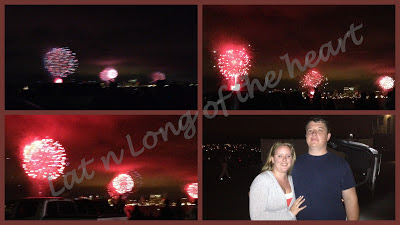 We got a four part synchronized show right in front of us! We could also see a the "Coronado" show and as we left the base we could see SeaWorlds firework show! We had the best seat in the house! To see exactly how close we were you can watch the video here.
After leaving the base we got home about 10:30 and started a real game of beer pong. It didn't take long before we had other people showing up to join in the fun. Mr. P & I played until 3 am ~ my brother and his friend stayed up until about 5am.

Friday July 5th:
We woke up around 10:30 ish and I made French toast for the guests and us. After eating we decided to run errands. I needed to get my Iphone fixed and Mr P volunteered to go with me. The Iphone tech guy showed me a short cut to use instead of paying the $100 to have the issue fixed and asked us to wait by the ipad mini's while he got some info on the release of the Iphone 5's. Next thing I knew we were paying for a Ipad Mini and we didn't get my phone fixed. So I've been promised the Iphone 5's as soon as it comes out & since I usually get Mr P's used Iphone while he gets the newly released one - this time he promised I get the newly released one. OK.. if you are scratching your head.. let me explain: Mr P bought the Ipad so that he could play an IOS game called "Clash of Clans". Although i use it while he is away from the house, but it is primarily his. 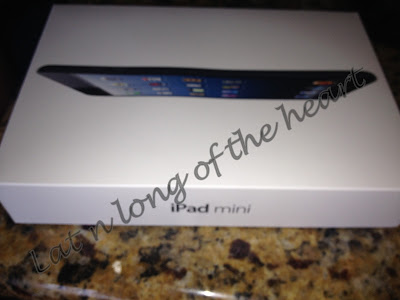 After setting up his new toy - we started another fun night of "beer pong". This time we had even more people come play and we stayed up even longer! I went to bed around 4am, and I have no idea when everyone else stopped playing.

Saturday July 6th:
My brother had weekend duty so he took Mr P's truck and left us for the remaining weekend. The house woke p around 11am and started getting ready for our day. Mr P & I were invited to the USS Gridley swim party that started at 1, but we were asked to be there around noon to help set up. I love the Gridley families, I alway have so much fun with everyone.. it was a blast! The boys played Football in the pool & after played flag football. I don't have any picture of the flag football because I fell asleep .. yep.. I sure did for about an hour. 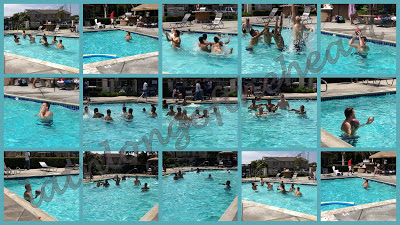 Next thing I knew we were packing up to head back to the hosts' house and they set up for a couple of games of ... you guessed it... beer pong. Now if you are counting, that is 5 solid days of this game.
After playing for hours we went home * I was the DD* and passed out.

Yesterday we laid around all day guzzling water. A ton of water! I got all the laundry down and the house picked up. We watched a couple of shows from a new TV series called "hero" - which is awesome!! I also ordered my Kindle Fire HD, per Mr. P's request and we ordered some Chinese food. So I  can honestly say that I don't plan on playing any beer pong for a minute. We had a wonderful weekend.. full of friends, good food and lots of memories!

I hope everyone had a great weekend too & I can't wait to start reading all about it!!! Now I'm going to just lay here like a bum because I am exhausted! Have a great Monday!!