This morning I am enjoying a cup of coffee while the plumbers fill the huge hole in my yard back up. Nothing I intended to do got done yesterday so I'm behind on all the chores I need to complete before leaving for Tucson tomorrow morning... here is my laughable version on what happened.

Yesterday am my husband woke me up at 5am to tell me that our toilet didn't flush. I thought, eh I'll get some durano, and he said 'have Harris (our new roomie) check the line in the front yard. Text me later and let me know if it is flowing or if the water is standing still... "OK". Two hours later Harris says "Umm Amber, his wife, tried to take a shower last night and the water in the toilet kept making a bubbling sound". I immediately remember my husbands request and passed it on to him. He walks outside with a cup of coffee and a cigarette, walks over to the line cap and twists if off.
Let's just say it wasn't empty, we didn't see water of any kind and it was full to the brim of the CVC pipe. We both started gagging and his wife had turned on the shower in her room, per his request prior to twisting off the cap, and poo started gushing UP all over the yard.

About an hour later this AWESOME water co showed up, Drain Masters, and we thought he had saved the day. After draining out the CVC pipe for a good two hours - yes two hours - he came into say that there was a huge blockage coming from Harris' bathroom. (Which was our old roomies room just a week ago) and that the blockage had been there for some time now. He said he couldn't get past the blockage but managed to pull some of it out and it looked like baby wipes. I started thinking "we didn't have a baby in the house" and I picked up a Clorox wipe and started cleaning the counter. It hit me like a MAC truck, OMG he had been flushing these cleaning wipes after using them in his bathroom!!

The plumber said that he would need to call another group out to flush the line & that we would need to use a high pressured hose to get behind this blockage and hopefully pull it out. For those of you who DON'T know.. baby wipes or clorox wipes do NOT decompose like toilet paper or paper towels. They actually expand a little - so make sure those handi wipes say "flushable" on the package!! Now we are out of water and toilets until 2pm, now 6 hours, with three adults, a three yr old and two dogs in the house. No laundry or dishes can be done, our house was at a stand still. The new Co shows up, MVP Rooter, to use a high pressure machine for this pipe. 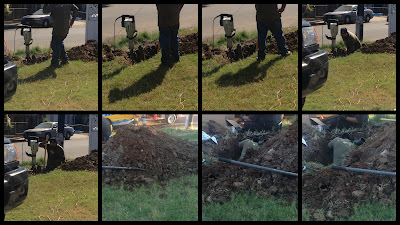 To set the scene even more, it's a flat 100* degrees at my house. No water, No bathrooms, No showers, and No AC ... we were miserable! These two men at 2pm are sweating in my front yard trying to fix my overflowing poop line. The smell was just horrible. They got the 'snake' stuck the first two times & then put a camera down to see the pipes. kind of like a colonoscopy. We watched this screen show us the HUGE blockage of wipes & then see a hole in the pipe.  Great. Our now $650 high pressure job just went to $1825 in one camera view. They had to dig a hole in my front yard, replace all the pipping (which ended up costing us $450 more) and reburying these lines. At 7:30 pm last night we were able to use our water again, so we went a full 11 hours without it.

I thought this cancelled our Tucson trip, but my awesome hubby said that he knew how much I needed this R&R. We are going but after spending $3,000 yesterday we agreed on: no iphone 5s for me, no birthdays, no Christmas, and nothing but a straight budget until this is paid off. My salty tears didn't change the hole in my yard or my bank account but it made me realize two things.
1. Homeownership sucks a@s sometimes.
2. That some of the frivolous things we buy aren't important, but knowing my kids won't starve if something like this happens again, is important enough to make me save more money.

As I type they are filling up this huge $3,000 shit hole in my front yard caused by someone flushing clorox wipes down a toilet. Today is going to be better than yesterday, and this weekend will be amazing! Shit happens, you just gotta clean it up and keep moving forward. ;) Hope everyone is having an amazing day and I hope that the start of your Labor day weekend is better than mine. :)