My original plan was to head 45 north of San Diego to see a dear friend of mine. To spend the day with her shopping, talking & sipping some coffee.. oh and playing with her baby. I got up, fixed my hair, did my makeup.. changed clothes like 500 times. Finally I'm walking out the door.. but oh crap! I forgot to ask the hubby to put money in my account.. I'll text him in the car. Before leaving my driveway I had sent a text saying "$$$$ please." 25 minutes later he still hadn't 'read' my text {man I love technology}. I pulled into the NEX gas station off the 15 ~ I only have half a tank of gas & I didn't want to stop mid trip. I pulled behind a row of vehicles, about 5 deep, and tried to text him again. He had already put the money in my account.. "thank you". Then he said "have fun"..With my car in park I reached over to get my ID out of my purse just to be ready. *BAM* 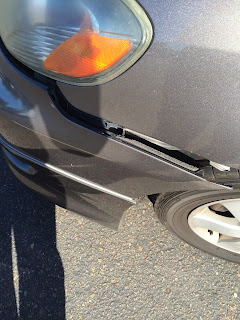 This Toyota Tacoma was literally about to be sitting on the hood of my car! So I did what anyone would do.. I honked. Wrong decision. The guy got startled and hit the GAS instead of the breaks... so.. yea. This is my 2nd or third accident with a vehicle in my life. High school, then in 2005 b/c of a tornado & Thursday. 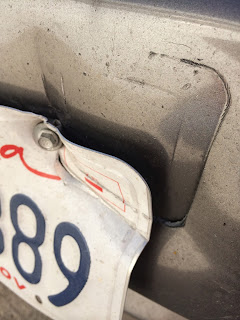 Basically my whole bumper has be replaced, it's pinched on at the center otherwise it would have fallen off. He bent my whole license plate, punching a whole in the bumper plastic! He jumped out, in uniform, and started apologizing. I got his insurance info, ship info and all that other good stuff. I was in shock. I mean I literally was just sitting there in a daze. He kept asking me if I was OK, but all I could think about is how my day was ruined. 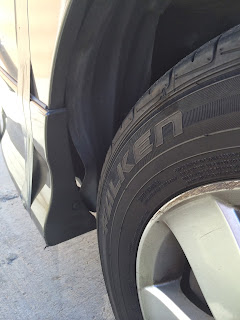 I pulled over to buy some duck tape {per hubby's request} to make sure that the bumper stayed on the car while I drove home. I was furious. Shaking and furious. I had been planning on this day for two weeks & suddenly it's gone. With my tail between my legs I drove back home sulking, pissed, crying, yelling.. ok that's a bit dramatic but you get the picture. 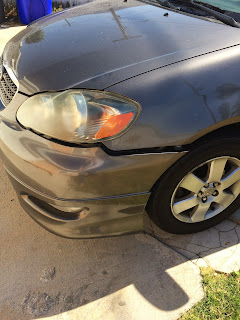 I made it back home, took a couple of these pictures for the insurance co & the blog {hehe}. I called the insurance co to start a claim, even though I was asked not to involve the insurance co by the other driver. We had the same insurance so my first experience with USAA was amazing. Not only did I get the deductible waived, but they hooked me up with a body shop to get it fixed! After 20 min conversation ~ I had rental car info, an appointment with a body shop AND I got a $60 discount b/c we never updated our marital status. {I also set up a policy for my rings for $3.00 a month!} The body shop was located at a Ford dealership not far from the house. The said that the bumper would have to be replaced, the bottom fog lights, and painting. They also said that they think that the re-bar was totaled and another bar behind the bumper but wouldnt' know until the bumper was completely removed. So the estimate of damages landed about $1,000 just by removing and replacing the bumper.

Little Scotty goes in for plastic surgery next Tuesday and it will take a three days for recovery.
* Check out part 2 tomorrow about the amazing thing that happened next!