Holy crap it's already Friday?!
Where has the week gone?!

I'm hoping you all had a wonderful 4th of July!!

My brother flew down with his girlfriend, A, for a couple of days.
We had a very busy couple of days celebrating and catching up.
It was exhausting and wonderful all at the same time.
Friday we spent the day at the beach 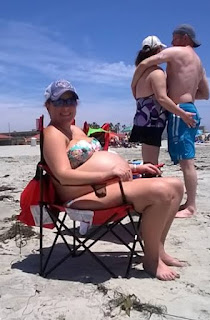 side belly pic at the beach
followed that by an awesome shrimp boil! 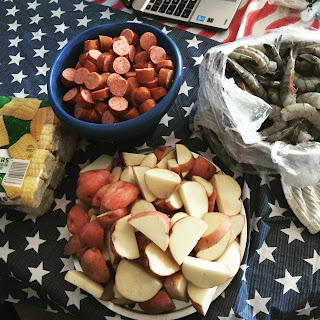 picture of the crab boil contents before being cooked

I think we were all way to busy to take a picture after it was all cooked. It was so good - I haven't had a shrimp boil in a while.  5 pounds of shrimp didn't go as far as I thought it would. We invited a couple of mutual friends over to share the festivities and after the shrimp boil the boys ended up playing beer pong until almost 3 am!!

On the Fourth we set around after breakfast with some of our friends who had stayed at our house.
Around 3 we all got dressed and ready to head to see the firework show. We have been going on base to see the show for the past four years. They offer kid games, food venders and three synchronized firework shows all by the water.
Also known as the "big bay boom". 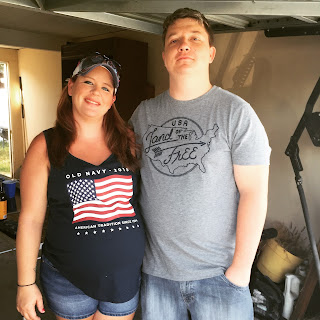 hubby & i before fireworks

Before heading to the firework show we stopped at "In / Out" so that "A" could have a Cali burger. I don't think it's that great and if you ask me it's not really worth pulling over for but when in Rome. We got to base & found our spot right by the water.
We ended up walking around and checking out the different vendors there & they had a snow cone truck - which made my night! Since my brother and husband both worked on this base we were able to share with "A" all the great memories we have collected on this base. 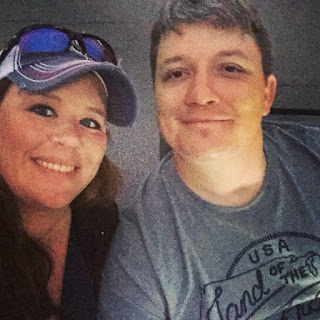 the hubby & I before the firework show 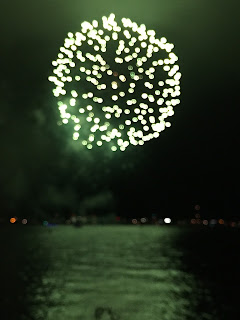 After the show & sitting in traffic for an hour we ended up back at my house. They boys played another night of beer pong while all the ladies called it a night.

The next day my brother & "A" were scheduled to fly out. We all got dressed and decided to doing some 'touring' stuff in Ocean Beach aka OB. Now.. if you are coming to visit me & Cali for the first time I highly recommend that we go to Coronado beach, Sea World, Shades - an amazing breakfast place off the beach in OB, and Hodad's. Hodad's is this little gem of a burger joint off the beach. There is usually a 20 min line outside the building to get a table but it's worth every second of it.. I promise! Oh I also have this thing were I take your picture as you take your first bite of Hodad's.. 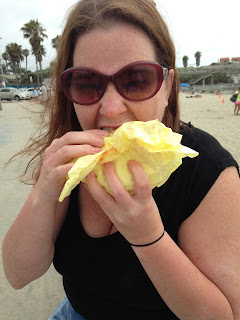 After Hodad's on the beach we went into various shops & just walked around. "A" has this app that she called "GEOCACHING". Its' like a scavenger hunt for kids/adults that people do throughout your city. This app has a map and shows you were these little gems are - when you find them you sign the paper saying your were there & check in on the app. After that you head to the next one... I may not be explaining this right but it was a lot of fun!
They do this all the time in WA & she got us all hooked on it here in CA. We got a couple of GEO spots while they were here.. we even visited one of the original GEO spots!
So if you are looking for something to do with the kids this summer & you don't mind driving around.. check out the app.
It's pretty cool.
{It's $10 for 3 months but there is a free version too}
Here is a link to help explain what this is that I'm talking about:
Geocaching.

Before heading back to WA we all took a second to capture our fun day with pictures: 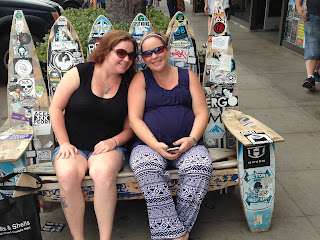 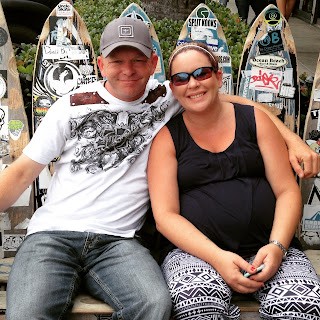 So that was our amazing Fourth of July weekend in a nut shell.
I hope you all had a great Fourth weekend too! I can't wait to go back and read some of your posts' - if I haven't already!