Write or Die Wednesday: 'Music is MY Escape'

Joining the Write or Die bi-weekly link up again hosted by:
Mia @ The Chronicles of Chaos
&
Vashelle @ Shelly's Cabaret

This little gem of a bi-weekly link-up gives me the ability to be creative with writing. Not all bloggers are all about journal entry posts & I love the creative thinking behind each topic!
If you haven't joined the fun yet -
What are you waiting for?

This bi-weekly prompt is: 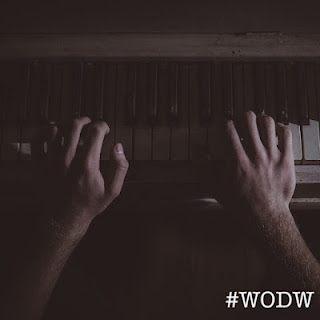 Which I have named
"Music is MY Escape" 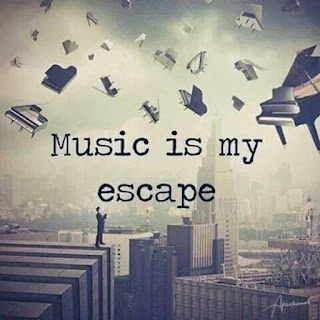 The definition of music according to the dictionary is:
'an art of sound in time the expresses ideas and emotions in significant forms through the elements of rhythm, melody, harmony, and color'

Evelyn was drained. Drained emotionally, physically & mentally. She walked through her front door & dropped her gym bag on her tile floor. She thought a workout at the gym would help calm her thoughts, so she spent over an hour on the treadmill before hitting the free weights. Now her body just ached instead of reliving her crummy disposition. Heading into the kitchen she rubbed her forehead feeling a headache starting to form before reaching to let her long blond hair out of the ponytail she wore. Her life was out of sorts and she needed to find a way to put it all back together. Normally Evelyn would call her brother, William, to talk out the issue and together they would find a resolve, but he had just left for a 7 month deployment. It had been a while since he had left on a deployment and she had forgotten how lonely these next couple months could be.
She opened the refrigerator door to reach for a bottle of water but grabbed the wine instead. 'Maybe a glass of this moscato would clear my head a little' she thought as she poured a generous glass. Evelyn mindlessly swirled the light gold wine around in her glass staring into the abyss that was her kitchen. The sound of her iphone informing her of a text message made her jump back into the present. With a deep sigh she walked into the living room with her phone in one hand and her wine in the other and set her iphone in the docking station on her entertainment center. Walking to the couch she stepped out of her Nike's before sinking onto her cool brown leather couch. 'I should get a pet' she thought 'maybe this weekend I'll go down to the shelter and rescue a cat or dog.' After taking a generous swig of wine she leaned her head back against the couch cushion trying to force her mind to stop thinking.

She turned on the flatscreen TV and changed the input to her iphone. Laying her head back against the cool leather the room came to life with songs from her playlist. The first song to play through her surround sound speakers with 'GDFR' by Flo Rida and her head started to bob to the beat. She took a swing of wine and enjoyed the flow of the bass & rhythm for the next 3 minutes. Jana Kramer's 'What I love about your love' filled the room next & Evelyn couldn't help swaying her head and tapping her feet to the song. The sexy voice of Dierks Bentley's 'Here She Comes' had her singing along and adding quite a bit of shoulder sway into the music. Before singing all Rhianna's parts in ' The Monster' she had drained her glass of wine. As she walked in to the kitchen to refill her glass she couldn't help but notice the beat in her step. As she poured her second glass of Moscato she was belting out the words to 'Good Girl' by Carrie Underwood. Putting the bottle back in the refirgerator she turned to head back into the living area before she realized that her grumbled thoughts and heavy feelings were gone. She even danced around her tile floors mouthing the words to Luke Bryan's 'Do I' before sitting back on the couch. Her mood had lifted and she couldn't remember why she was so frazzled earlier. Settling back into the cool cushion of the couch she allowed her mood to mellow as she hummed the words of 'Jar of Hearts' by Christian Perri.

Evelyn allowed the music to sooth her soul and better her mood. With all the rush and bussle of the days she hadn't taken time to relax and just listen to the music. A couple of hours later she had taken a shower & washed all those negative thoughts and emotions away. Crawling into bed she sang 'Set Fire to the Rain' by Adele and then drifted off to the most restful sleep she had remembered in months. She had always heard that music healed the soul but had never experienced it first hand.
As she woke to the new day her mood was lighter and brighter then it had been in weeks. Her co-workers had even noticed the difference & commented on her new disposition that morning before her shift started. Getting a cup of coffee in the break room Evelyn smiled and vowed that she would keep her music dates at least once a week. Believing in the power of music and it's healing process .

I couldn't find a ending to this short story that I really felt comfortable with but I hope you all understand. These are actual songs from my iphone that were playing on shuffle. The power of music of any genre.. even classical and relaxation.. can change ones mood 1,000 fold. Music is what I reach for during my darkest and bleakest hours.

I hope you all enjoyed the bi-weekly link up & encourage you to join us for the next writing excersice - which you can find at thechroniclesofchaos.com

Until then I hope I am hoping to have this baby & I also hope that everyone has a fantastic Fourth of July!!
Posted by AMY MICHELE at 1:00 AM