A Update on Life.


Hello.
I would love to say that I have been super busy & haven't had time to stop and blog ... but it's honestly the last thing I think about. Don't get me wrong - I love you all! I usually just try to get a post up for my favorite link up "Write or Die Wednesday".

Speaking of love. I can't believe my son is 15 weeks old.. 15 weeks! I just blinked and here we are. Gearing up for his first Halloween this week.. can't wait to share him & his adorable costume! We are also going to be carving some pumpkins this weekend & next year we'll take him to a pumpkin patch to collect his own - but I think he's too young this year.

So here is a pinterest fail for ya. I found these adorable plates with the kiddo's feet and hands for halloween & thought "Oh we can do that!". I sent the hubby to go get some construction paper & he talked me into going to CeraminCafe {which isn't hard to talk me into - Love the place!}. So off we went. SO they ask that you paint the item 3x so it seals on the ceramics.. then they fire it and you pick it up in a couple of days. Problem is you can't put a babies foot in the same exact place three times. This is what I wanted to make: 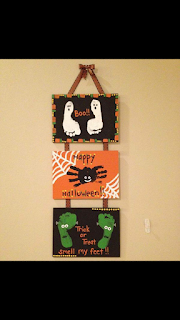 and this is what we got. 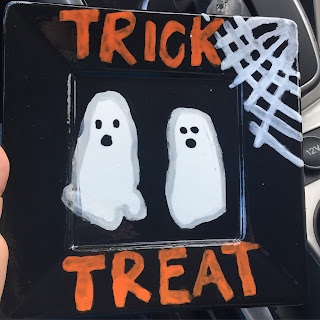 Not exactly the same.. still adorable.. but not the same. You can't really tell those are his adorable little baby feet .. *sad face*. Plus we didn't notice that we forgot the 'or' until after.. but the hubby says it's implied, lol. It will be a keepsake non the less. I wanna go back for Thanksgiving to make a Turkey.. not sure that it will turn out any better.. but we are going to try it again. Again, still a great keepsake... yea?

Gosh we have some crazy plans these next couple of months on top of the holidays!! Super excited to share all of those details with you guys at a later time. {Don't wanna jinx anything}

Little man is growing up so quickly! He wants to sit up and stand already. He loves to sing and coo at us. He absolutely hates tummy time & playing on his back. Seriously hates it. Of course we make him do it but man that kid can scream when he wants too. Normally Little Man is pretty chill. He is such a happy baby {aside from tummy time}. We got blessed with the fact that he has my sleeping habits & has slept through the night since he was three weeks old. It's very rare that he wakes up for a feeding after 10pm or before 4am. If he does.. he just eats and goes right back to sleep. I can sleep through anything and thankfully so can he. Daddy is a early riser and Mommy is a night owl.. he got the best of the both of and fit right in the middle. 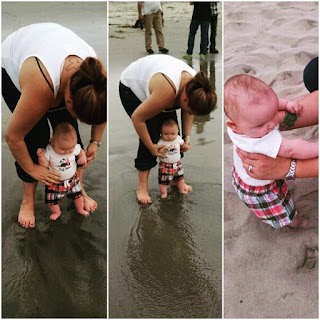 We took Little Man to the beach the other day - for the first time. {If you follow me on Instagram then you have already seen the pictures}. My hubby thought he'd freak out over the cold water & I thought he was going to hate the texture of the sand - we were both wrong.  We found seashells to commemorate his first - which I'll frame with the three pictures we got. I mean it was a big deal for me.

Back to the holiday stuff. I have already managed to purchase his "Santa" items for Christmas. We wanna get him a Little Tikes "Little Red Wagon". {Anybody else start singing Miranda Lambert's song when you read that??} I think that will be our from "Mom & Dad" gift to him even though it's recommended for a two year old. I think it would be perfect for beach trips!  I also managed to find all three "My First" outfits for the holidays. Little Man ended up getting two different "first Halloween" outfits but I'm sure they will be used considering this kid slobbers on everything. I can't wait to do a Halloween post to show you guys! His Thanksgiving and Christmas ones are adorable. Thanks to pinterest my etsy addiction has just grown post partum. Through pinterest I was able to find these awesome Christmas PJ's.. 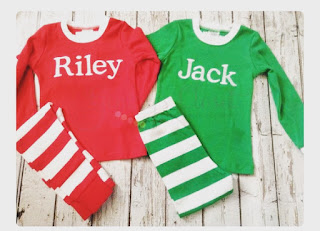 I ordered the green ones with his name on them because frankly red is not this kids color. I ordered these adorable PJ's from "Gentry's Closet". I also manged to find this keepsake pillow case & had to order it. I got it in the mail the other day and was "oh it's cute" then I put the pillow in it and I fell in love with it! Serious difference between just the case and the stuffed case.. 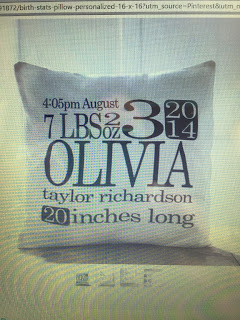 I found this from "Parris Chic Boutique". Super simple to order & it was super quick getting to me too. I didn't order the case with the pillow but wish I had spent the extra $5. I got mine with orange lettering & I absolutely love it. One of my favorite Etsy purchases so far.. simply because it's unique and it's timeless. I'll have this pillow forever. One day he'll have this pillow. I just think it's super sweet. I have a couple of things I'm holding off to order simply because I can get carried away super fast. We just printed 'all' of his pictures off and made a photo album with them.. seriously filled that beast and he's not even four months old. I also caught up on his baby album book.. which frankly is a joke of a book IMO... and got his shadow box done. I put his first outfit, socks, the umbilical cord tie, our bracelets, a newborn diaper and a non naked picture of him. I mean all his first pictures were in the buff so I had to find the next best one... I mean if Wal-Mart would print his very first pictures out I'd be tickled pink!

So yea.. I've been busy. I have wanted to be a Mommy for so long that I just eat this stuff up. My hubby thinks I've lost my mind and forgot that I didn't marry a millionaire but to me these are the important things. The first outfits, the shadow box, the pillow with his birth stats, and his monogrammed PJ's. You only get one first and I wan to make sure that I capture those moments.. yea know?. Maybe I'm silly but a hopeless romantic is always a hopeless romantic. I want my kids to know that they meant the world to me... of course I can do that without going bankrupt but again I think these are important. 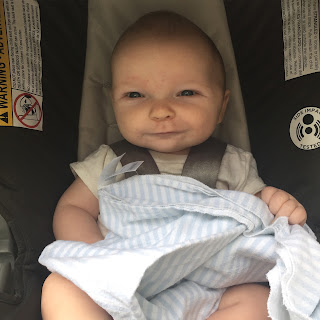 I'm off to bed. Just wanted to give a quick update and share some picture of little man. Hope you all join me next Wednesday for the Write or Die link up!! Have a safe and Happy Halloween everyone! Look forward to seeing all the costumes.. both kiddo's and adults costumes!

Linking up with
The Chronicles of Chaos
&
Shelly's Cabaret
for this weeks bi-weekly link up. Today's topic is:
This bi-weekly Write or Die topic is: Loneliness 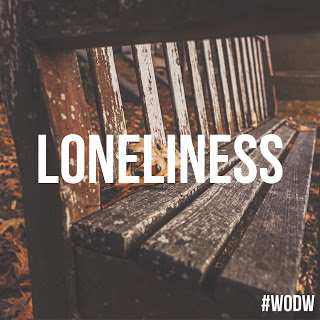 WODW - The language of Water.

Linking up with
The Chronicles of Chaos
&
Shelly's Cabaret
for this weeks bi-weekly link up. Today's topic is: 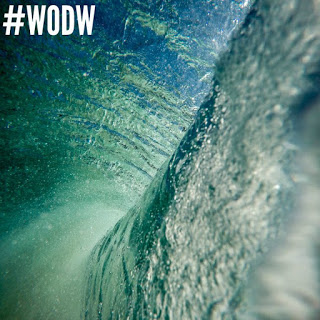 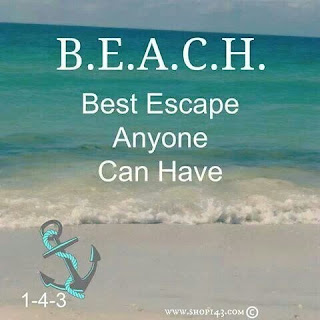 When my world gets too stressful. When I feel like the world is crashing all around me. When I have a huge decision to make. When all I can hear is static and noise. When I need to find my sense of gravity and peace. When I need a day filled with peace and beauty. When I just simply need a recharge.. I go to water. I find the nearest pool, lake or ocean and go. Someday's it's just as simple as driving by the beach and looking over at the waves crashing against the shore. There is something so rejuvenating about it to me.  Like the waves speak a language I don't quit understand buy my soul does. I can feel the stress, worry, annoyance, static just melt away. It can take a matter of moments to a couple of hours. I can sit in silence for hours at the beach. I can simply show up in a pair of shorts in a tank top with a bottle of water - and sit for HOURS. 9 out of 10 I turn my phone off & bring a book just in case I want to read.. but reading is a distraction. 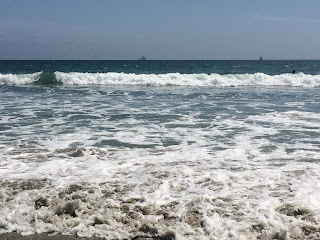 Water has always been a calming factor to me. I love when it rains. I love when it storms. It's a different kind of love language but it's still really refreshing and rejuvenating. I could sit in a chair on a porch and listen to the rain for hours. I used to make a pot of coffee and do just that. Sit on my front porch in Oklahoma and just watch it rain. 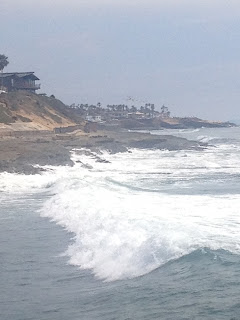 I even love songs about rain. SheDaisy - I Wish I were the Rain/ Jana Kramer - I Hope it Rains/ Carrie Underwood - Blown Away/ Dierks Bentley - Settle for a Slowdown/ When It Rains - Eli Young Band/ Bring on The Rain - Jo Dee Messina/ Let It Rain - David Nail/ Songs About Rain - Gary Allen/ She's My Kind of Rain - Tim McGraw and of course Rain Is A Good Thing - Luke Bryan. 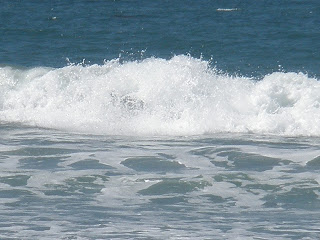 I love being in water. I love the feel of the water. I love the coolness, or the saltiness. I love how it makes you feel so youthful and free. I love the feeling of being in a pool can quickly take over your body. During hot days in OK - I'd sit out in my blow up pool and relax. Melt the week's stress away. It was heaven. I used the pool in my backyard here in CA for my pregnancy relief. It was a godsend. 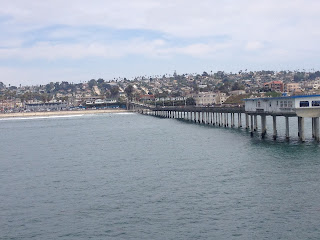 Water is my super weapon. It's my de-stresser. It's my relaxing tool. I have no idea what I'll do when we move away from CA and I'm not 20 min from the Ocean.  All of these pictures are ones that I have taken. Hope you all enjoy.