Gosh everything has been so busy that it's been really hard to stop and make a post. My husband came back home for a short 10 day visit. We went to Tucson to see our friends Dad and got food poisoning on the way. We went to leave Monday but little man kept throwing up so we turned around - then the next day we did leave and the husband got it on the way. I got sick pulling into their driveway.. it was horrible. It was a quick thing.. so we were good to go by Wed afternoon. We ended up leaving Thursday afternoon and making it back to SD that evening.
So Friday, the 21st, I woke up super itchy. I couldn't stop scratching and nothing releaved the itch. I had an OB appointment that afternoon so I was trying to muster through until then. The itching got so bad that at one point I was crying in the shower begging my husband to rub the sand scrub on my back b/c it was a form of scratching..that was my last straw. I called Labor & Delivery to explain what was happening and before I could really finish explaining - I was told to head that way and be prepared to have a baby. I was all "what?!" So we drove to the hospital.. got admitted.. and told that we were having a c-section b/c they believed I had "obstetric cholestasis" or "intrahepatic cholestasis" {ICP}. ICP is ususaly diagnosed in the 20 week range of pregnancy and is believed to be associated with a liver problem during pregnancy. Long story short they were scared to leave the baby b/c still borns have been associated with this type of condition if ignored and they decided that since we were 27.6 weeks they were taking the baby. 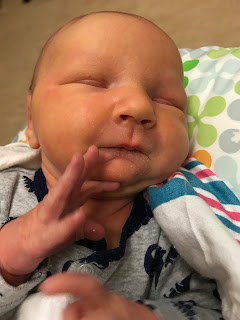 Little Dude stayed in NICU for a couple of days due to fluid on the lungs - which is normal for c-section babies that didn't have a chance to be birthed vaginaly (so they explained). I was able to heal and see him as often as I wanted, and we both got discharged the same day. The husbands leave was extended ten extra days, thanks to his amazing Captain, and my sister arrived the day after we were discharged. Little Dude is two weeks today and doing great. He's breast feeding, he's still got his umbilical cord attachment, and we were encouraged to get him out and about b/c he had a touch of jaundice. So we've gone to a couple of places with him snuggled in our Ergo carrier.

The husband has already left and rejoined his ship and my sister is here until after Mother's Day. I have another sister coming out for an additional two weeks the day after Mother's Day until the first week of June. SO we are doing really well. Little man is handling being a big brother like a champ by ignoring the baby exists lol. 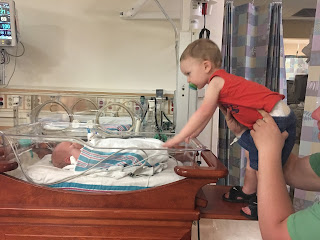 As we introduce our newest member to our family - my husband will continue his return on his ship. After he returns we have little man's 2nd birthday, and the commissioning of the ship. We will also have both boys baptized in the ships bell - since they were both born while Dad was aboard the same ship (super rare). SO I'll leave you with our first family picture, taken from an iphone. I just wanted to let your guys know the baby had arrived!! 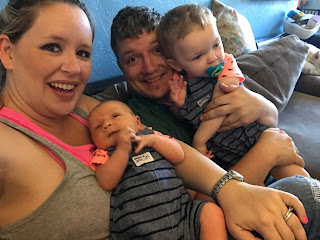