Oh my goodness - I can't believe i wrote that last post before posting about the birth of my 3rd child! 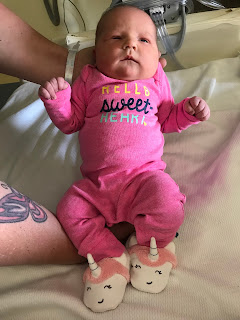 My daughter was born April 12th @ 10:28am - she was 8lbs 14oz and 20 1/2 inches long. She is beautiful and look exactly like her brothers. We both came up with her name while I was pregnant with little man and once I found she was gonna be a girl we just went with it. Her middle name is after a good friend but also ends up being the husband and I's sisters middle names - total win! 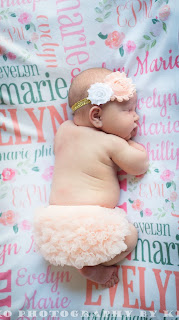 So far being a parent of 3 is pretty simple. She is a super relaxed baby and hasn't kept us up all night once. The crazy part has been all the boys. Little Dude turned one 9 days after Little Misses birth & he is currently cutting teeth. So he is crying and whinny. He loves his sister but is super jealous at the same time. We have spent a lot of time protecting sister from little Dudes lovies. Little Man is super protective and super lovey.. we keep catching him playing with her feet or trying to give her a paci when she cries. It's been very cohesive aside from Little Dudes teething. 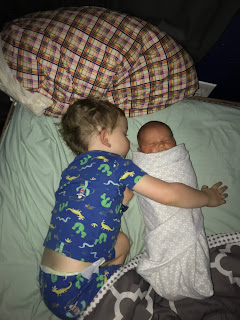 My husband has been helping with a lot of the post partum help/care. He is great with the kids and driving me nuts. He has no understanding of 'healing' time. We got in a arguement b/c he kept track of how many hours I slept for two straight days. Umm you are home so I can sleep, take some pain pills and survive the pain of pulling a kid out of my stomach (3rd c-section). He hasn't really done that since but he is wanting to just 'go go go' and I'm all damnnnn dude.. but he goes back to work this week.. I got two and half weeks of maternity leave. Crazy. 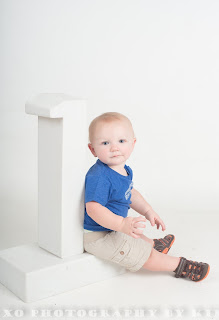 We are having little Dude's first birthday next weekend & I'll try to log in and share some pictures of the party. I'm sure it will be a blast! We are going to double up with Cinco de Mayo and have a taco train. Mixing the love of taco's with a transportation theme.


I just wanted to take a moment and update that little Miss has arrived. She is perfect and we are all doing good. Life has continued without issues and I'm very blessed.
Have a great week!
Posted by AMY MICHELE at 7:48 PM No comments:

I have fallen madly in love with Miranda Lambert's music. I have downloaded and listened to every album relentlessly and I have really taken a liking to her newest album "The Weight of these Wings". During a shuffle sesh I came across this song that I literally had to pull over to listen too. It's off the "For the Record" album and it's called 'Oklahoma Sky'.


I can't pin point the wording that just stopped me.. but if I had to guess it's the second set of lyrics. "Lightening flashed, everything went silent. A feather could have knocked me to the floor. Missing piece was found, I was finally alive. Meet me under the Oklahoma Sky."

I often wonder what it would be like to cross that state line again. I often wonder what, if any, types of emotions would flood my body and soul. So many great memories - it's where I tell people I grew up. I got my first apartment, bought my first set of groceries, was independent for the first time in my life. I struggled, I prevailed, I struggled ( haha ). I was jobless, almost homeless but I never gave up. I learned to love the slow and quiet. I learned to love the outdoors and just take it all in. It's where I made some lasting adult friendships, it's where I found love, it's where I got married and my Dad walked me down the aisle. He'll never be able to do that again. Those memories are sacred.
There are also bad. the conflict and struggle with my ex husband. I wonder if I pulled into that church parking lot if I'd remember all those times I set in the empty parking lot screaming at my windshield and crying.   I wonder if all the sadness and all the grief would flood over me and make me so emotional. I wonder if I'd remember all the back roads and all the hidden gems I'd once found and loved. I wonder if thunderbird would hold the same amount of love that I once felt for it.
The night's we spent around a fire talking, the afternoons we spent on the lake. The weekend barbque feasts we'd throw down - which we couldn't afford but did anyway. The friendships and bounds I thought would have lasted forever. Truth is towards the end I became so insanely unhappy & I just wanted out. I wanted out of every relationship and I just wanted to disappear. I think once I lost my job in 2010 it was the catalyst opportunity to run and I did. I never looked back.. until recently. My life has flourished and matured in ways I never thought possible. We are always in a state of growth and I'm for contempt to be in the place I am now. So when the husband & I talk about his retirement and where we are going to settle down - I often bring up Oklahoma. One of these days he may just agree to it but until then I'll continue to wonder how my heart would react to being back across that State line. Although I was born in Texas I often say I grew up in Oklahoma.. I look forward to showing my kids one day where that all took place.

I'll make it back one day.. I'll cross that state line.. I'll say my apologies for the way that I left and beg forgiveness underneath the Oklahoma Sky.

I'm not a 'Snowflake' by society's means but I due tend to have a lot of complaints under my belt. Lately though it's been really hard to push down the hurt, anger and disappointment. So I'm gonna vent for a moment.. A couple nights ago I was pretty sure I was going into active labor. So a good friend took me to the L&D while the husband stayed with the kids and got some sleep. The reason he stayed behind was because all of this is was after I ate dinner and would have to wait apx 8 hours to have a c-section anyway so the husband might as well get some rest. I mean I was going to stay hooked to a IV so he might as well be rested. Anyway.. the point isn't to explain why he didn't take me. The smug triage nurse was sure I was in 'false' labor and they did a cervical check to find that I wasn't dilated and the baby was facing posterior. So they sent me home apx an hour later and told me to try and wait it out for our scheduled c-section. I was so disappointed because I was really hoping I'd have this baby before April and I'm tired of being pregnant.

Once home I realized that I was struggling with the disappointment of a lot of things centered with this pregnancy. Silly or not there seems to be a lot of resentment towards my 'family'; which is really non existent outside of this home anyway. I'm going to try and spell this all out anyway... bare with me.  So if I would have had baby girl that night we would have been expected to make various phone calls to various people announcing her arrival. These people, well my side, don't call, don't text.. we aren't included in anything family.. we just exist in Cali. They do comment on instagram or facebook about my kids from time to time.. esp about little dude...  but they aren't there for me when I need support. So my question was why? why call?  why exchange these happy moments with people who don't really care - they just want to be informed.  Like my Mom would be absolutely ballistic if we posted the birth on facebook without calling her. but why should I feel expected to call someone who NEVER calls me and when I do call seems to want to just jump off the phone? The ONLY sibling I'm close to from my adopted side, got a job and now doesn't have time to talk on the phone or text me. Actually every time I've called in the past month she answers and hangs up without explanation . So I'm furious over the expectation of notifying them of the babies birth when they can't even have a conversation with me outside of that. BUT If I don't call them .. it's going to be verbal and mental assaults via phone and text like it was when little man was born. (YES I've actually been on this EXACT cross roads when my first child was born). So do I call out of respect (which they don't respect me) or do I just stick to my guns and say .. no I'm not calling.

Third. When little dude was born apx a year ago.. I had a hard time with people coming to stay with me to help with little man. My husband was on deployment and I ended up having to need a c-section because we had placenta previa - which means the placenta was down by the uterus instead of the belly button. I ended up begging and convincing three people to come out and bought two of the three plane tickets. The second person who came out constantly complained that she didn't even know why she was there b/c I was up moving around. I swear to you that I tore my inner stitch and I had so much trouble healing but the Dr's wouldn't listen to me. So I am so thankful she was here b/c I swore the out stitch was going bust open if I lifted little man. Anyway so a year later and here we are.. the husband isn't deployeed but we can't get anyone to come out and help. Which also means that nobody is excited enough about the babies birth to be here. That sucks guys.
Think about that..  my Mom doesn't want to come, my sisters don't want to come.. so I constantly have to explain to my OB team that I will not have any family come out for this babies birth. It's sad. It's horrifically sad. I'm not important enough, my kids aren't important enough, for lives to be inconvenienced to share a special moment like a BIRTH OF A CHILD. I also don't know if anyone reading this is familiar but military husbands only get TEN DAYS of baby leave. So I have TEN days to heal from a third c-section before he returns back to work.. TEN! With all of this I still can't convince family to come help but they want a phone call the moment she is born. ppsssh.
So now I'm faced with relying on local friends - who also have jobs and kids.. to help me through the first three weeks (at least) so that I can attempt to find a normal to having three kids. So why on earth would I be angry or upset you ask? {insert rolling eyes}. I feel ten days is a little unrealistic.... but it's being changed but wont be in effect for us.

ugh. adulting is hard. I wish i was 20 something again and didn't care what other people thought.